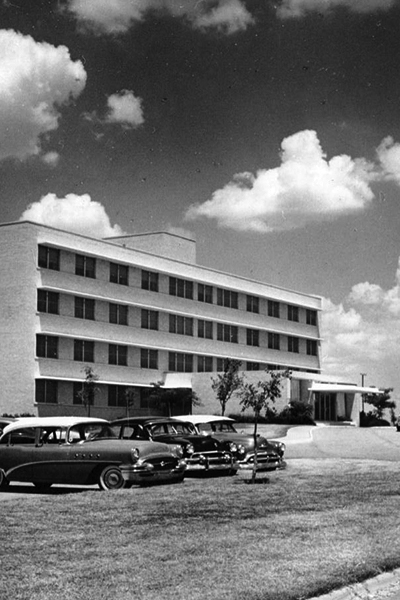 The Southern Oklahoma Memorial Foundation was founded as a charitable trust in 1950 for the purpose of raising funds to construct and support a new, air-conditioned hospital to facilitate the provision of high-quality healthcare for residents of Southern Oklahoma. Contributions were received from more than 1,600 individuals, corporations, and foundations within the area. Those funds, along with a government grant, funded the cost of building and equipping the facility.

At exactly 12 p.m. Sunday, May 29, 1955, the doors of the brand-new Southern Oklahoma Memorial Hospital opened for public tours. The facility offered the latest amenities and was Oklahoma’s first fully air-conditioned facility with private rooms.

In the 1990s, local leaders determined it would be in the best interest of the community to sell the hospital to a larger healthcare entity. Following a search, the hospital sold in 1996 to Mercy Health Systems. The Southern Oklahoma Memorial Foundation became the recipient of the net proceeds of the sale and converted to a private, grantmaking foundation.

Today, the Foundation continues to honor the intent of its original donors by giving priority to grant requests that support health-related services, issues, and education. Other areas considered for grant funding include education, social services, and civic/cultural activities that contribute to the quality of life in Ardmore and the surrounding areas. Grants are awarded to Oklahoma non-profit organizations located within, or providing direct service to, a 50-mile radius of Ardmore.

The Foundation makes available its most recent IRS Forms 990-PF in PDF format: